"Get A Life Iain!" Alex Salmond And Iain Dale Do Battle

A "fake news" tweet from an SNP MP about Theresa May led to Alex Salmond giving LBC's Iain Dale an ear-bashing - not that Iain is one for backing down.

This is the Tweet he was taking about - or a screenshot of it, since Monaghan has deleted it in the meantime: 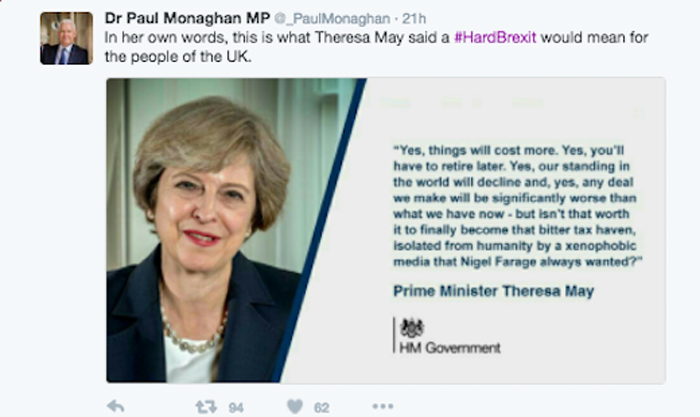 The Tweet, imitating an official government message, claimed our "standing in the world" would decline because of Brexit and Britain would become a "bitter tax haven".

It also takes aim at "xenophobic media" and "Nigel Farage".

Iain Dale wanted Salmond to answer for the Tweet: "What a disgraceful piece of fake news that is!"

The former First Minister wasn't buying Iain's reaction though: "It's a desperate attempt to whip yourself up into a sense of outrage...I know you're in the United States, but [try] a five letter word called irony...I've never heard such faux outrage in all my life Iain!"

Pressed more by Iain though, Salmond lost his cool a little, telling the presenter to "get a life for goodness' sake!"

Whose side are you on?