As a new study finds racism was given "a new lease of life" by Brexit, Iain Dale clashes with the man whose poster featuring a white skinhead was one of the most controversial of the campaign.

Simon Woolley is the director of Operation Black Vote, whose "A Vote Is A Vote" poster sparked a big debate and accusations of discrimination.

He joined Iain Dale this morning on LBC and maintained his defence of the poster: "Our poster was a warning call to society - if you engage in a wretched, toxic immigration debate - "

Iain cut across him: "No, what it was, it was a racist poster of its own. 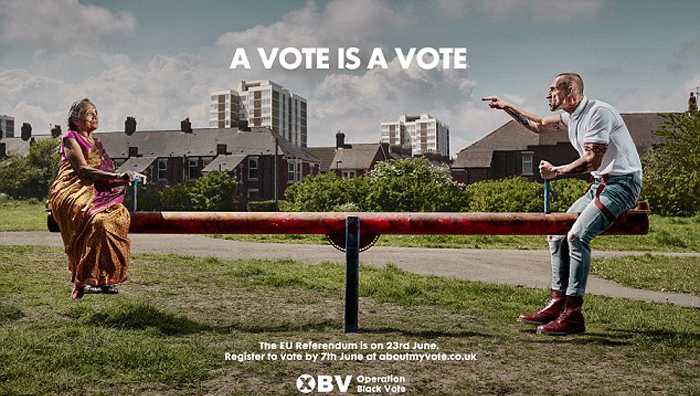 "To depict a white race as a skinhead, we all know what you were talking about there."

Woolley: "There is a tiny minority.

"That poster, of that individual was not a depiction of the average white person. It clearly wasn't."

Iain: "That's what most people took it to be."

Woolley insisted though "They're wrong. I'm telling you, from the source, they're wrong. We made a caricature of a minority of hateful indiividuals and actually that has been borne out to be the truth. And worse!

"There is a minority and that minority has risen, that has been truly hateful. We wanted to stop it, we couldn't, we are where we are now and it's not a nice place to be."

Iain put it to Woolley that "an equivalent poster depicting all Muslims as a suicide bomber."

"You keep saying all Muslims," replied Woolley, a former Commissioner for Race on the Equality and Human Rights Commission, "I keep telling you: we depicted a tiny miniscule minority."

"In your mind you did," said Iain, "But that's not what how most people took it."

"Where does that character look like the average person on London streets?" asked Woolley.