The Mayor of Liverpool Joe Anderson has said his brother has died after being admitted to intensive care with Covid-19.

In a Twitter post on Saturday, he said: "Despite the efforts of all the staff @LivHospitals ICU my brother sadly died at 10.45 last night We want to thank the dedicated staff risking their lives for us.Thank you all for your messages of love and support Let's stick together and support each other and win this battle."

On Friday evening, Mr Anderson urged people to follow the rules to prevent the spread of the virus as he revealed his eldest brother was in a "very serious condition" in hospital in the city.

The news came less than 24 hours after the Mayor revealed his brother had been admitted to intensive care with coronavirus.

Despite the efforts of all the staff @LivHospitals ICU my brother sadly died at 10.45 last night We want to thank the dedicated staff risking their lives for us.Thank you all for your messages of love and support Let’s stick together and support each other and win this battle💙❤️

Mr Anderson tweeted on Friday night: "10 mins ago my sister-in-law a Nursing Sister has told me my eldest brother her husband has got Covid-19 he is in the Royal @LivHospitals in the ICU in a very serious condition."

His tweet also highlighted a video shared by the Liverpool City Council Twitter account that featured Dr Richard Wenstone making a plea for people to follow coronavirus rules to ease pressure on the NHS.

Mr Anderson wrote: "Please watch the video, follow the rules & understand why we all need to fight the enemy #Covid."

Earlier on Friday, he joined Liverpool City Region leaders in branding the tier system of coronavirus regulations a "shambles", following the announcement that gyms in Lancashire can stay open under the strictest measures.

Gyms and leisure centres in Liverpool, Wirral, St Helens, Sefton, Knowsley and Halton were ordered to close from Wednesday as the area was placed in Tier 3.

Gym owner Nicholas Whitcombe was fined £1,000 when he refused to close Body Tech Fitness in Moreton, Wirral, on Wednesday.

But Tier 3 measures for Lancashire announced on Friday do not include the closure of gyms.

Liverpool City Region leaders said they were given no choice on the package of measures but a Government spokesman said the interventions were a result of consultation with local authorities. 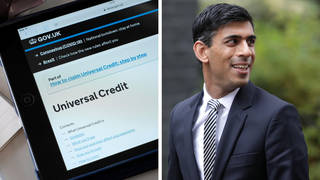