Andy Burnhan has branded a reported move by Oxford University students to remove the Queen's picture from their common room, because she is a symbol of colonialism, as "divisive".

Members of the Magdalen College Middle Common Room, which is made up of post-graduate students, overwhelmingly voted to remove the portrait, according to reports.

Speaking to LBC's Nick Ferrari the Mayor of Greater Manchester, Andy Burnham said he could not relate to it.

He told Nick he thought "these kind of gestures are getting out of hand," adding he could not support the move.

He urged the public to "always respect the Queen," as he suggested people needed a "sense of proportion" before branding the move "divisive."

Political website Guido Fawkes reported the motion was launched to make members "feel welcome", with one student said to have commented "patriotism and colonialism are not really separable".

On its website, Magdalen College Middle Common Room described itself as "one of the biggest graduate communities of the traditional Oxford Colleges".

In May, the Department for Education introduced new legislation to Parliament to protect the rights of visiting speakers through the Higher Education (Freedom of Speech) Bill.

If passed, the bill could see universities face fines if those invited to speak are cancelled as a result of their views.

For the first time, students' unions will also be required to take steps to protect the freedom of speech for both its members and visiting speakers.

The Office for Students (OfS), the higher education regulator in England, would have the power to impose fines on institutions if they breached this condition.

Academics, students or visiting speakers will be able to seek compensation through the courts if they suffer loss from a breach of the free speech duties.

WHO investigation into the origins of Covid-19 branded 'completely hopeless' 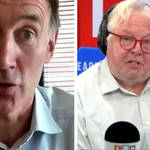