Ann Widdecombe explained her decision to defect from the Conservatives to the Brexit Party by saying that Nigel Farage's achievements are greater than Margaret Thatcher's.

The former minister served as a Conservative MP for 13 years, but revealed she is to stand for the Brexit Party in the upcoming European Elections.

Speaking to Nick Ferrari this morning, she was effusive in her praise for Nigel Farage, who set up the party.

She said: "Farage is the only politician I can think of, other than Margaret Thatcher, in my lifetime who has set out a major agenda and actually delivered it.

"And his achievement is even greater because he's done it from outside parliament. He has obliged parliament to take notes."

Ms Widdecombe said she was standing to become an MEP to give the Conservatives and Labour "a bloody nose" in the elections on 23rd May.

She added: "What I'm hoping that we'll do is send a seismic shock through the Labour heartlands, through the Tory shires to both parties, saying the nation's really had enough.

"All we want now is for this to be resolved now and get on with it.

"Unless that message is sent very very clearly, parliament will continue to do what it's been doing in the last three years 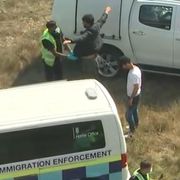