Mr Robinson, real name Stephen Yaxley-Lennon, was released from prison on bail after winning an appeal against a contempt of court finding.

Mr Batten has been a supporter of the EDL founder and things got heated when they discussed his past.

After the Ukip leader said Mr Robinson represents quite a lot of working class people, Nick asked: "In as much as? It would appear he's not particularly sympathetic to people with a different skin colour."

Mr Batten queried that, but Nick pointed out: "Well, he was the founder of the EDL, which is a bit of a clue, isn't it?"

However, the Ukip leader insisted: "The EDL had black members as well and when he set it up, it wasn't meant to be a far-right organisation. That's why he left when it was infiltrated."

Things then escalated when Nick asked why Mr Robinson was a member of anti-Islam party Pegida.

Watch the video at the top of the page.

Coronavirus: Employees unable to take annual leave can carry it over for two years - government

Coronavirus: NHS staff, police and public being coughed on by people claiming to have COVID-19 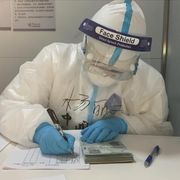 Coronavirus: To China, the virus is now a foreign problem - and they're creating a fortress to keep it so