Nick asked how the shadow foreign secretary was going to make Labour more attractive, especially to people in the north.

"We need to listen and learn from the electorate," Ms Thornberry said, "I think the result of the general election was clearly a disaster, not just for the Labour party and our candidates and our MPs, but frankly for communities that are not going to be protected now from the next five years of Boris Johnson."

She said what Labour need to do is "make sure this never happens again, we must win the next general election."

"We have to be strong, we have to take him on at the dispatch box and I've got two years experience of doing that and I think I do it relatively well."

She told Nick, "I thought the manifesto was a good one" to which Nick disagreed entirely.

She continued about the manifesto, "The problem was it was so big and it had so many ideas in it that it was quite difficult to work out what our priorities were in it."

"The Financial Times said it would wreck the economy," said Nick, "it wasn't costed, Emily Thornberry."

The shadow foreign secretary said that Labour had the red book with the promises and grey book which costed it.

"The important thing for us moving forward is what is going to be our priorities now," she said.

She continued that with the Conservative government, the headlines sound better than the realities. 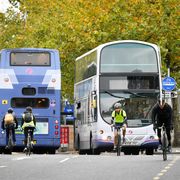