After Jean-Claude Juncker questioned whether David Davis is up to the job of negotiating Brexit, Nigel Farage hit back - and it's hilarious.

The European Commission President queried the Brexit Secretary's suitability for the role. But Nigel Farage accused him of double standards.

He told Nick Ferrari: "Talk about pot-kettle. Have a look at the video that was taken in the Baltic States two years ago of Juncker greeting national leaders. Now he was clearly downwind of a few. He was slapping leaders around the face, patting them on the head. He pulled Cameron's tie.

"And this is the man that says Davis isn't competent? You couldn't invent it.

"Next Wednesday morning in the European Parliament in Strasbourg, Juncker will be giving his annual State of the Union address. I'll be sitting a full six-feet from him when he does it and I shall respond in kind and defend Mr Davis's honour."

And that video that Nigel refers to... here it is: 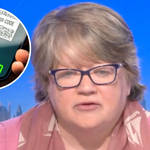 FINALLY! Police get tough on M25 eco mob and shut down latest protest within minutes