Nick Ferrari calls out the CBI chief over its predictions on Brexit job losses and hits to GDP that didn't come true.

Carolyn Fairbairn of the Confederation of British Industry (CBI) told Nick Ferrari a new business manifesto for the government is all about a "life beyond Brexit", and the next Prime Minister has an opportunity to "come in and back business" and reconfirm big infrastructure projects including HS2, Heathrow expansion and the Northern Powerhouse Rail.

But Nick put to the Director General that the CBI had made mistakes on its Brexit predictions, pointing out the lobby group claimed 950,000 jobs would be lost as a result of leaving the EU.

"Why should we listen to a word you say?" Nick said. "You're so wrong!"

When Nick asked whether we had lost 950,000 jobs, she said the forecast put together is going to "turn out to be broadly right".

Nick continued to press on the figure, asking where the jobs were if the UK was at record employment.

Ms Fairbairn said: One of the things that has happened because of the Brexit uncertainty is that firms have kept on employment.

But Nick persisted, until the lobby chief said it was "absolutely right".

Nick said: "And you said there would be a 5% hit to GDP, and you and I know there hasn't been. You can't keep doing these scare stories, you're just wrong."

The CBI chief replied: "But the important thing is that we look to the future now, most people would accept the economy is in the slow lane as a result of Brexit."

Asked whether she had any advice for Britain's next Prime Minister, Ms Fairbairn said whoever moves into Downing Street needs to send a "very strong signal" that the UK is "open for business".

"I would head first to our immigration model where we have given signals that we are no longer open and welcoming, so look at the 30k cap that is going to be introduced, the 100k cap on numbers coming in.

"This would send a very strong signal that we are open for business." 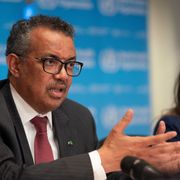