Nick Clegg explained the measures the social media giant has taken to avoid interference and fake news in elections.

"As a company you need to change, as things went wrong in the 2016 election" Nick Ferrari told Nick Clegg, former Deputy Prime Minister and current Head of Global Affairs and Communications at Facebook. He wanted to know what the online giant has done to avoid this happening again.

Mr Clegg acknowledged that "it appeared, and many people were unaware at the time, there was organised Russian interference in the US elections in 2016.

"No one really knows to what extent that influenced voter behaviour but it certainly was serious enough and it took place on facebook to lead to, certainly in the case of Facebook because it's a very important platform for political debate to very very significant changes." He then told Nick the measures the company have taken in recent years.

Mr Clegg told listeners that "millions of fake accounts are blocked every day" in an effort to avoid misinformation on the platform.

He added that there has been work to "really drive up the number of people in the United States who vote, register to vote, participate to vote"

In terms of allowing political ads on the platform going forward, the former leader of the Lib Dems told Nick that Facebook now work to see "who is conveying which message, who's paying for it and they all have to be authorised" for anything to be seen by the public.

He added that they "make sure that foreign interference which happened in 2016 cannot happen again" revealing that "last year there were 50 of these very very sophisticated networks identified compared to only one in 2017." 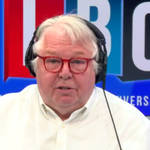 Pfizer vaccine can be kept in fridge for far longer than previously thought, EMA says