Nick To David Davis: 'Theresa May Had To Work Hard To Be This Calamitous'

In some polls Theresa May's rating has dropped from 58 to 22, and Nick Ferrari quizzed Brexit Secretary David Davis about it.

On his LBC Breakfast show, Nick asked: "The party's in trouble, you've gone down. Her rating has gone, in some polls, from 58 down to 22. You'd have had to work hard to be that calamitous."

Mr Davis replied: "That's actually higher than most prime ministerial ratings in history, but never mind. Look, polls are polls...you have been doing this long enough to know that polls get it wrong.

"They'll come up on the day, and they'll make a judgement. They'll say when they're casting their ballot, in 11 days after that election, then the negotiations will start, who will they send in?

"Will they send in Theresa May, who's shown she knows how to deal with these characters, or will they send in Jeremy Corbyn, who's never negotiated a thing in his life?"

Nick then asked the Brexit Secretary about the Tories' "U-turns".

Watch the clip to see what David Davis had to say.

UK may not 'return to normal' for at least six months, government doctor warns 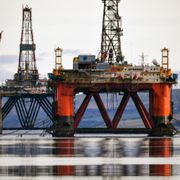