It comes after full details of the government's Beating Crime Plan were released after a heavily criticised scheme to give victims of crime a named police officer to contact were unveiled at the weekend.

Policing Minister Kit Malthouse said he supported the idea from the Prime Minister and revealed it is already part of the "victim's charter."

But, ever equipped with the facts, Nick told Mr Malthouse there were 5.4 million crimes committed in England and Wales last year.

Nick asked the Minister if he knew how many police officers there were across the 43 police forces in the UK.

Accusing the Prime Minister of being a "proficient and efficient journalist," Nick said the pledge had grabbed the headlines.

"In reality, it boils down to a Mary Poppins, or a pie crust promise, easy to make, easy to break."

But, Mr Malthouse refuted this, claiming it was "not the case." 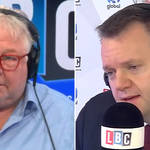 Shadow Home Secretary can't say how much the minimum wage is

Kemi Badenoch 'has no idea what she's talking about' on colonialism, says message leaker

Hundreds of thousands of people not using their HGV licenses, says Minister