This is what happened when Nick Ferrari tried the new meat-free version of Gregg's steak bake.

The high street chain's meat-free sausage roll was one of the most popular snack foods of 2019, with so many people wanting to try them that many stores ran out upon launch.

The Greggs vegan steak bake hits the shelves just in time for Veganuary, as hundreds of thousands of people pledge to have a meatless month.

With the launch of a meat-free version of the popular steak bake, Nick Ferrari had a taste.

After hearing from a series of commuters who praised the taste of the product, Nick gave it a try.

Afterwards, he said: "Look, I'm going to be honest with you. I don't like a steak bake at the best of times. And this is absolutely the same.

"It is not the sort of product I would eat. It doesn't quite taste the same.

After the break, he added: "It's got an aftertaste, I can't get rid of it.

"I was being polite earlier - it's horrible! It's not for me. Bring on the avocados."

Watch the taste test at the top of the page. 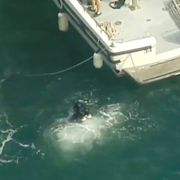