A former Cabinet Minister has insisted that Britain should not offer the EU a penny until talks on a free trade deal start.

Theresa May is believed to be ready to double her offer for a divorce payment to £40billion.

But Owen Paterson, the former Environment Secretary, says we should withhold the money and walk out of negotiations unless then move on to trade talks now.

Speaking to Nick Ferrari, Mr Paterson said: "I'm very clear we should offer not a penny more until they do seriously talk about a free trade arrangement.

"I think we should put the pressure back on them. I said a month ago, because they flatly refuse to talk about free trade and they keep insisting on talking about secondary issues first, we should say 'Unless you will come to the table properly, we should assume we're going to WTO terms'.

"Now WTO terms have been caricatured as going off a cliff and zero deal. This is all nonsense, this would be a global trade deal, the terms on which we trade with the rest of the world, the terms on which America and India, for instance, trade into the European Union at a far more successful rate than we have done from with inside a single market ourselves.

"That would give all those involved, everybody, industry, truckers customs, everybody, time to set themselves up and make the necessary possible arrangements.

"The clock is ticking away, we've wasted October, we're going to lose November and I personally would not offer a penny until they sit down and really talk about trade.

"Because it's massively in their interest. The Germans sold us 950,000 cars last year. Deloitte have done a report that if we do go to WTO rules and if we raise tariffs, they lose 18,000 jobs in South Germany alone." 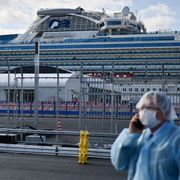 Coronavirus: Britons stuck on Diamond Princess cruiser in Japan to be evacuated on Friday