Henry Bolton revealed he may be forced to sell his home to fund his leadership of Ukip.

The position is not paid and he admitted he currently had no plans for how he would get enough money to live off.

When Nick asked how he would fund himself, Mr Bolton said: "We're going to fund that, don't worry."

Nick pressed on, insisting he hadn't answered the question and Mr Bolton added: "It's going to be funded."

He insisted that Ukip donor Arron Banks would not be donating money to his leadership and revealed that he is currently funding himself.

Nick suggested that he couldn't afford that going forward, but the Ukip leader said: "I might have to. I hope not.

"I entered this knowing it's not paid. If I don't get any sort of renumeration from this, then we'll be selling the home and so on. I will if I have to.

"This is a job that has to be done. This country is at such a juncture now that we have a desperate need of a bit of leadership and a pro-Brexit opposition."

James O'Brien's epic monologue on the state of British politics 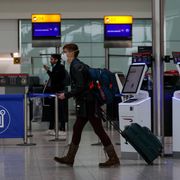