A leading Brexiteer has told LBC that the Conservative Party would be split forever if Theresa May works with Jeremy Corbyn to force a deal through Parliament.

The Prime Minister told the House of Commons that she would speak with the opposition to try to rescue her Brexit deal.

But Steve Baker said that a soft Brexit would cause permanent divisions within the Conservative Party and it would result in the end of the party.

Speaking to Nick Ferrari, he said: "This is a very, very serious point.

"I'm a Conservative because I think that the Conservative Party offers the best hope of decent government in this country and prosperity.

"As I've warned repeatedly since I resigned, an attempt to secure this high-alignment, half-in half-out Brexit using Labour votes would probably lead to a catastrophic split in the Conservative Party."

When Nick clarified if he felt that meant the end of the party, he added: "I'm afraid so.

"It would be absolutely crazy of course, because if there were a split and if the members of a new party were to be re-elected, they would probably have to form a coalition with the Conservative Party.

"It would be a waste of everyone's time. The better thing to do would be to just deliver it now." 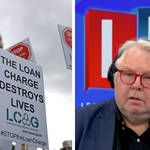