As the Government plans to extend strict coronavirus laws until September, Maajid Nawaz demands the proposed six month be cut to three months on renewal.

Maajid Nawaz has been outspoken on the draconian nature of the emergency powers in the coronavirus act, especially when it comes to the right to protest and gather effectively being criminalised.

He told listeners that "the Government are asking for another six months of emergency powers," and as is seen by the revolution within the Conservative party, he stressed the importance of standing against an extension of these powers

Maajid noted that the devil is in the detail of the UK's strategy for lockdown easing: "Irreversible just means we're not going to go backwards, it doesn't tell you when they're going to move forwards."

He warned that with the planned renewal of the coronavirus act, the Government may not ease restrictions on the scheduled June 21.

He wondered the motivation behind extending emergency powers for six months: "why do you need emergency powers taking you to September, when suspiciously, furlough also ends until. What is going on here?"

Read More: Covid-19 crisis in numbers: LBC brings you the stats you need to know 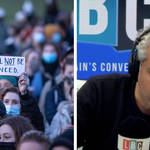