David Lammy doubled down on his criticisms of Comic Relief as he accused the charity of “complete BS” and told LBC it “don’t need to exist”.

The Labour MP has been embroiled in a Twitter storm with Stacey Dooley after she shared a picture with her and a young child while filming a Comic Relief documentary in Uganda.

He said the “world does not need any more white saviours” and took issue with celebrities being flown out to make films which send "a distorted image" of the continent.

“Do we really need to pay for these celebrities to go to Africa, so British people can sit on their couches, send money but ask no deeper questions about what is going on in those African countries?”

A spokesman for Comic Relief said: “We have previously asked David Lammy if he would like to work with us to make a film in Africa and he has not responded. The offer is still open."

But, the Tottenham MP hit back: “That’s complete BS.

“They did ask me to make a film. It’s completely wrong to say I didn’t respond. I declined.”

He continued: “The bigger question is, are they serving their own purpose?

“Let's be absolutely clear about this. Far more money is sent to Africa by Africans in the United Kingdom than money Comic Relief raised.

“Comic Relief don't need to exist. There are many other ways to support what’s going on in Africa.”

The world does not need any more white saviours. As I've said before, this just perpetuates tired and unhelpful stereotypes. Let's instead promote voices from across the continent of Africa and have serious debate.https://t.co/LySa0BXeyi

Eddie asked: “Is your suggestion they’re simply trying to make themselves feel better?”

He replied: “I’m afraid part of it is about that. It’s about the privilege, to go to Africa, to say you’ve done something worthy. It’s not about challenging your audience to ask bigger questions.

“The experience of Europeans descending on Africa to civilise a continent is as old as colonialism.

“I am suggesting very clearly that Comic Relief is playing into that and it may well be the case that they raise a little less money if they did it in a slightly different way. 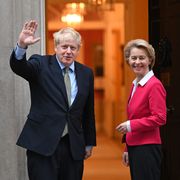