This caller from Northern Ireland warned recent nights of violence could see people trying to "drag" the region back into the troubles of old.

Brian from County Down called LBC to express his concerns amid a resurgence of violence in Northern Ireland.

During an emotional call, Brian told LBC's Eddie Mair he hails from the Unionist community.

"I am so proud of my Irishness as much as I am of my Britishness..."

He said he wants to remain part of Britain.

Brian warned one of the "real issues" was that a "younger generation of people getting sucked back into this."

He said a "vacuum" was creating an environment that could see NI return to the troubles.

Brian started to break down as he spoke about his children who were born after peace came to Northern Ireland.

The conversation comes ahead of emergency talks which are set to take place in Northern Ireland following a week of violent attacks on police.

In the latest scenes, which took place in west Belfast on Wednesday, a bus was hijacked and set alight, petrol bombs, masonry and fireworks were thrown at officers and a peace wall gate was lit up in flames.

"I served in the UDR [Ulster Defence Regiment], for 23 years. I didn't serve to kill Catholics," Brian told Eddie.

He said during his military service he saw "the most horrible things" and he warned that the region cannot return to this.

"There's so many people that would like to drag us back to that as it serves their purpose."

An estimated 600 people gathered on either side on the Lanark Way peace wall gates from 5pm on Wednesday, which escalated to "significant disorder".

Police quelled crowds on either side of the peace line and deployed six AEPs, a type of plastic bullet, as well as arresting two men, aged 18 and 28, on suspicion of riotous behaviour.

The violence is unfolding at a time of increasing rancour in the political sphere amid tensions over Brexit's Irish Sea trade border and the fallout from the police's handling of a mass republican funeral that took place during pandemic restrictions last year. 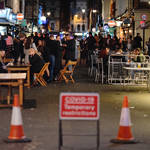 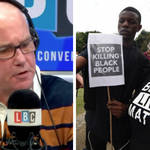 Hairdressers 'fully booked for at least six weeks' ahead of reopening