The shadow Brexit minister has confirmed Labour will call a vote of no confidence in Theresa May’s government - and it’s likely to be before Christmas.

Speaking to LBC live from Westminster , Jenny Chapman said "it's going to happen, it's on its way".

And after being pressed by Eddie Mair, the Labour frontbencher replied: "The vote of confidence will probably come before Santa does if I can put it that way".

Before adding: "I've probably gone further there than I was intending to".

Jeremy Corbyn has so far resisted pressure from his own MPs to launch a bid to topple the government.

It’s after Theresa May deferred a crunch vote on her Brexit deal after admitting she did not have enough support to get it through the Commons.

Today, the Prime Minister has been on a tour of Europe in a bid to salvage her withdrawal deal.

But, after meeting Angela Merkel, the German chancellor warned the agreement could not be renegotiated.

Labour's Ms Chapman insisted the party would table a vote of no confidence in the government.

She made a strong hint that it would come before Christmas - but played that done shortly after on social media.

Ms Chapman tweeted: "Might have got a bit carried away trying to make a joke about Christmas! Labour is prepared to bring a no confidence vote and will do so at the best opportunity to topple this rotten Government." 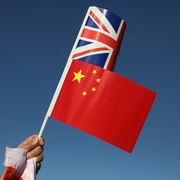 Nigel Farage: "Why does the government keep making promises it can't deliver?"