This gardener said that after quitting smoking before the lockdown began, he's been able to "smell summer for the first time."

As reports show around one million people have quit smoking over the lockdown, Eddie Mair was taking calls from people who have kicked the habit during the coronavirus pandemic.

Mark had been smoking for forty years until he quit in January. He told Eddie that during his journey he hasn't had "any major changes to my life other than I've been able to smell everything."

As a gardener, Mark was overwhelmed by the smell of nature while streets have had a massive lack of cars during lockdown. He told Eddie that "going out in this car free world has just been incredible.

"I'm smelling summer for the first time in forty years."

Pushed on specifics, he told Eddie that "it's after summer rain when everything just smells amazing" adding that he's "felt like I've been walking around in the Garden of Eden."

His reasoning for giving up smoking was a "bad case of pneumonia two winters ago" that he puts down to the amount he had smoked until then. He told Eddie that he was given a medication that after two weeks, made him "lose the craving for cigarettes."

He went on to say that he'd quit just before coronavirus came to Europe and felt it was an omen. "I felt like I've just been ahead of it for the last six months" he said. 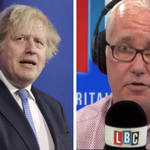