"Non-violent prisoners should all be released during coronavirus outbreak" due to staff shortages, says prison worker union chief.

The military could be brought into prisons amid an increased risk of violence during the coronavirus pandemic, a Government source has confirmed.

Dave Cook, from prison worker union POA, said that police forces, who are normally enlisted to help in jails in times of need, are unable to due to their own staff shortages.

He told Tom Swarbrick that prisons are a "pressure cooker" with inmates locked up for 20 hours per day, and the volume of inmates means social distancing measures are "almost impossible" to enforce.

Mr Cook said: "The longer that it goes on, then the chance of violence and disorder increases. You only need to look at Italy.

"Coronavirus went into every prison in Italy and they suffered riots and hostage-taking and everything else, so that is what the Prison Service are trying to avoid or trying to keep a control against, but as staff get contaminated - and they will - then the number of staff available will start to drop off."

"It then becomes harder to let prisoners out of their cells, so that they can phone their families and have exercise."

Unless some lower risk prisoners are released the military may need to be drafted in to help keep order, he said.

He shared that this may be the only solution: "The Prison Service does have contingencies for the loss of staff and normally we would call upon the police to come in and assist in prisons, however, the police made it quite clear, they're suffering the same problems that everybody else will.

"The police officers will contract the virus, so they're facing a lack of staffing as well, so the alternative is that they'll be turning to the military and I'm aware that some military have been trained on some of the basics of working inside prisons.

"They're unlikely to be working close, face-up with the prisoners. They will be working somewhere within the prison."

There are already plans in place to grant pregnant inmates temporary release to protect them and their unborn children from Covid-19.

65 inmates have tested positive for coronavirus in 23 different prisons in England and Wales.

Around 3,500 prison staff are in self-isolation due to suspected coronavirus, representing about a tenth of the workforce, and 14 employees have tested positive for the virus in eight prisons, as well as four prison escort and custody services staff.

"Hopeless" response to coronavirus has brought R number over one, former scientific adviser 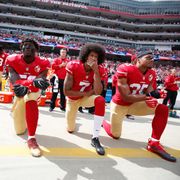