Shelagh Fogarty gave her instant reaction to an Ofsted report which has found sexual harassment has become "normalised" for children in schools and colleges.

Almost 90 per cent of girls and 50 per cent of boys said either they or their friends had been sent unsolicited explicit images or videos, according to the report.

Inspectors were also told that boys shared "nudes" like a "collection game" on platforms such as WhatsApp and Snapchat.

More than nine in 10 girls and almost three quarters of boys had experienced sexist name-calling as well, or knew their peers had, a lot or sometimes.

The report also showed that children do not believe it is worth reporting cases of sexual harassment as it is so common.

"If you get straight As in your exams and go on to the finest universities in the land, but you sexually harass people, you're a failure."

She continued, "You're a failure. You're an unspeakable failure if you do that."

"A teacher, a parent, headteacher, a leader at a school..should be making this the top priority for a child's formation while they're in that school or in your family as you raise them.

"At parent's night I would say to parents are you discussing this kind of behaviour with your son or daughter? Is it happening to them, are they doing it to other people do you know?

"This Ofsted report and the scale of it means an awful lot of kids are either doing this or having it done to them."

Chief inspector of schools, Amanda Spielman, said she was "shocked" by the findings of the review.

She said: "It's alarming that many children and young people, particularly girls, feel they have to accept sexual harassment as part of growing up.

"Whether it's happening at school or in their social life, they simply don't feel it's worth reporting.

"This is a cultural issue; it's about attitudes and behaviours becoming normalised, and schools and colleges can't solve that by themselves." 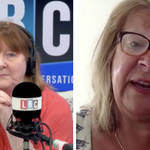