'What do you expect him to do?': Callers clash over Boris Johnson's performance as PM

This is the moment two callers clashed over Boris Johnson's performance as Prime Minister in a heated exchange on LBC.

Andy from Bournemouth and Bev from Upminster had the back and forth just a day after Boris Johnson apologised for getting his own rules wrong when asked to clarify the 'rule of six'.

While Bev was content with Boris Johnson's performance as Prime Minister, Andy was far less optimistic about his record.

Bev defended Boris Johnson's response to the coronavirus crisis, saying: "We didn't know in December quite what was going to happen...Nobody saw this coming."

She also asked: "What do you expect him to do?"

Andy then asked Bev if she had ever heard Eddie Mair's "takedown" of Boris Johnson.

He was referencing an interview of Boris Johnson conducted by Eddie Mair on the BBC back in 2013 when Mr Johnson held the post of Mayor of London.

In the interview, Mr Mair confronted the now Prime Minister on claims that the made-up quotes while he worked for the Times and provided a friend of his with the address of a person they wanted to "beat up".

The exchange between Andy and Bev on LBC got so heated that LBC presenter Shelagh Fogarty at one point had to interject as the pair were talking over each other.

Shelagh even said that their debate had come to resemble last night's US presidential debate between Donald Trump and Joe Biden, an event which was described LBC's correspondent Simon Marks as a "trainwreck for American democracy."

Bev finished by telling Shelagh that the thinks people should give Boris Johnson "a break" and then suggested businesses should do more to help the UK to recover from the coronavirus crisis.

She said: "Where is the entrepreneurial spirit in this country? Why aren't businesses trying to help themselves rather than just sitting back on their great behinds and expecting to [have handouts] all the time?" 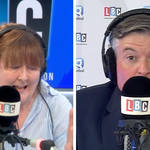