'My colleague sexually assaulted me in the work lift,' caller tells LBC

This caller opens up about a colleague she had known for years sexually assaulting her in the lift at work.

Crimes motivated by misogyny will be recorded as a hate crime by police in England and Wales after the government acquiesced to the demands of campaigners following the murder of Sarah Everard.

Caller Sally reflected on this news, celebrating that it could help "raise awareness" about women's experiences, such as her own.

Sally told Shelagh that just before Christmas she got into a lift at work and a colleague she'd known for many years.

"Over the years I'd known him, he's made quite a few inappropriate comments to me and probably behaved as people might describe as a bit touchy-feely."

"The lift doors closed, he grabbed hold of me, with both arms around me and tried to kiss me."

Sally said that he managed to kiss her a number of times on the face but not on the lips as she was trying to jerk away from him. Despite the fact she also kept saying no, the man would not stop.

"Eventually I gave him a good hard shove and the lift doors opened," Sally said, "I told him he was inappropriate and that was that and put it to the back of my mind.

"I didn't say anything I just thought 'disgusting dirty old man. I pity him rather than anyone else.'"

She told Shelagh that she has not thought about the event until LBC's discussions on making misogyny a hate crime: "The fact I didn't report it or do anything about it almost lets him think he can get away with doing that again, and he could try again with a woman who would be much more disturbed about it than I was."

She posited that women "become numb" to sexual assaults and harassment, as she "shrugged off" her colleague's actions, to which Shelagh agreed.

She continued: "We've also got to think if I haven't reported it, it validates his behaviour and he might do the same to somebody who's much more affected."

Shelagh said that "without a doubt" this man has done it before and will repeat the offence, reminding Sally "none of it" is her responsibility.

If you have been affected by issues of sexual assault, harassment or abuse you can seek help and advice at www.womensaid.org.uk 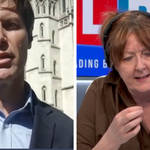