A Scottish caller was left admitting "You've got me there" after James O'Brien questioned his views on Scottish Independence.

Fraser originally voted for Scotland to become independent in the Independence Referendum in 2014, but after commuting between England and Scotland, he has changed his mind.

As Nicola Sturgeon unveiled her plans for Indyref2 by 2021, he said he wanted Scotland to respect the result of the referendum - and also to leave the European Union.

James was quick to pick up on his contradiction. After Fraser pointed out that you can get free prescriptions in Scotland, he said: "That's one of the things that reminded me how ridiculous it was for Brexiters to claim that we all have to follow rules from Brussels.

"That's why I'm confused about what you've said on independence.

"You voted to be independent while you were a member of the European Union.

Fraser's only response was "You've got me there." 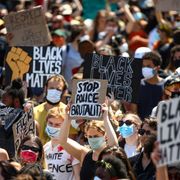