An ex-Oxford student tells LBC the removal of the Queen's portrait in Magdalen College would've been an insignificant decision taken by 'whoever happened to be there at the time'.

It comes as members of the Magdalen College Middle Common Room (MCR), which is made up of post-graduate students, overwhelmingly voted to remove the portrait.

Martin in Kilburn, who was MCR President at St Catherine's College, began by revealing: "I've actually been in that middle common room, the MCR.

"You need to think social club rather than Carlton Club when you think about MCR's in Oxford Colleges. They tend to be one room, quite dingey, the sort of thing that you would be used to going to a school disco [in] kind of thing.

"The surprising thing about that room was that the picture of the Queen was actually there!"

James replied: "When you say you were surprised it was there, is it possible even that it was put almost as a piece of mischief by previous students?"

"A member of the MCR can say I don't like that picture let's have a vote to take it down, and it just happens to be who is in the general meeting at the particular time."

James replied: "So it's an enormous pile of nothingness in one sense, and yet here it is on the front page of The Times newspaper, never mind the Mail and the Express.

"How many students do you think, ball park, would've been casting votes on this?"

Martin then said at his college of St Catherine's, the biggest in Oxford, they only had 20 to 30 people in their meetings.

"So two dozen people have had a vote on whether or not to take down a picture on the wall of their social club?"

Martin said: "Exactly, that is basically it.

"I'm angry that the papers are angry because it's a nonsense story!"

James then said there is a sense of frustration at watching "good, honest, decent people" being treated like "absolute cattle by people getting paid a fortune to whip them up into a state of frenzy over a massive pile of nothingness". 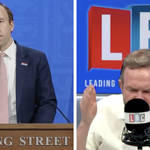 Excess vaccines should be given to 'countries that need it' rather than kids, expert insists