'The Prime Minister repeatedly expressed a desire to see the bodies pile high in their thousands rather than prioritise people's lives over everything else.'

After reports emerged that Boris Johnson had made comments about "bodies piled high" on more than one occasion James O'Brien examined the issue.

It comes after the PM was accused of telling aides he would rather let coronavirus 'rip' than impose a second lockdown.

Watch: 'Would you spend £5,900 on an armchair?' - Nick Ferrari grills Government Minister

Hitting out at the Prime Minister, James said he found it "repellant".

He explained to his LBC listeners that for Boris Johnson to have "presided over that catastrophic handling of the first wave, and then decided that we should probably have more deaths rather than any of the alternatives is disgusting."

Watch: James O'Brien gets to the heart of claims levelled against the PM

James said the problem the nation faces is "saturation" because "there comes a point where it is everywhere you turn, the disgraceful conduct, the lies, the perceived corruption, the cronyism, the unanswered questions.

"Everywhere you turn, so you become immured to the full horror of it."

James opined on the fact the Prime Minister "repeatedly expressed a desire to see the bodies piled high in their thousands, rather than do what countries with vastly superior coronavirus records have done and prioritised people's lives over everything else."

But this led James to a revelation.

"This demands a pause," James said.

"It demands a moment of reflection for every family in the country that has lost a loved one."

"The Prime Minister thought that more deaths would be the best available option when presented with the choice between lockdown and no lockdown."

'I told you so': James O'Brien's fiery clash with an ex-Brexit Party MEP on fishing

'What is it about Boris Johnson that leads people to suspend the normal rules?' 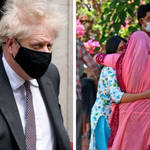 'We need oxygen': Cremator in India calls on Boris Johnson for support

Voters head to the polls in 'Super Thursday' election