James: Why Daily Mail Judging People By Their Nationality Is Crazy

This is a passionate James O'Brien on just how ridiculous today's Daily Mail front page on foreign truck drivers is.

In a compelling monologue from his LBC show, James reacted to the front page of the Mail, which features images of foreign truck drivers using their mobiles while behind the wheel: 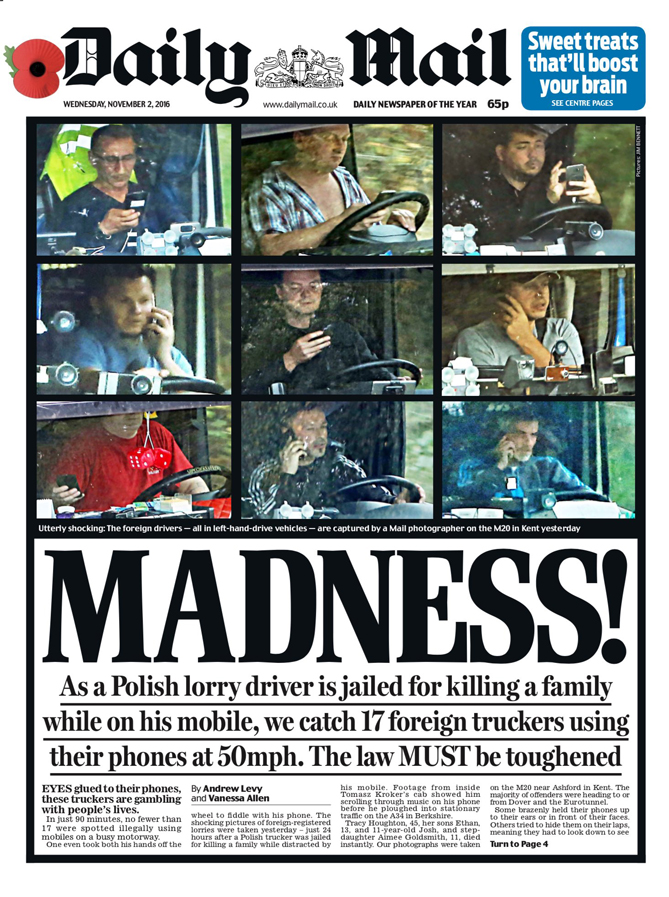 Why did the Mail focus on this? Because a Polish trucker - who's lived in the UK for 16 years - was imprisoned earlier this week for killing a family while distracted on the roads by his phone.

James was thoroughly unimpressed, asking why their nationality was relevant...but their star sign wasn't?

"That's the madness that we're caught up in at the moment.

"Focusing upon the nationality of lorry drivers using their phones, instead of recognising that every driver in the country has a personal, conscience-based battle with their mobile phone when they get behind the wheel."

James spoke about Thomas Kroker, the driver who had killed the family, who "happened to have been born in Poland. So apparently that's relevant. He's lived here for 16 years.

"I want to know what star sign he is. That's really important. If he turns out to be a Pisces, we've got to go after those Pisces."

"Those Pisces are taking the mickey out of us. If he's Capricorn, that's fine, I'm a Capricorn, I mean I feel sorry for him, he shouldn't have done it. I'm glad he's in prison but it's not indicative of a broader problem if he's a Capricorn.

"If he's a Pisces, I'm going to send out my photographers tomorrow to take photographs of Pisces people on the phone driving their foreign Pisces lorries.

"That's how sensible it is to focus on ethnicity and race, right? It's as sensible as focusing on star signs."