James O’Brien has warned that “apathy and self-interest” may lead to the public ignoring the fine print of Boris Johnson’s care plan.

It comes as experts have warned that the government’s guarantee - that care costs will be capped at £86,000 - does not cover money spent on care home food and accommodation.

This means that you will still have to foot the bill if your relative ends up in a residential home.

The average weekly cost of living in a residential care home is £704, while the average for a nursing home is £888.

"Because on my list, apathy and self-interest may well blind people to the small print, the fine detail, and the analysis."

James’ comments came after Steve, from Shrewsbury, told LBC that Brits whose parents develop Alzheimer's could still pay thousands of pounds a month for their care.

“If your mother or father goes into hospital with Alzheimer's, which is when you are going to need residential care, then you are still going to be paying thousands of pounds a month”, he said.

“So it’s a con even for the young people who might think ‘oh my inheritance is saved’ - no it isn’t he is lying to you again."

He added that the very people who end up with massive care bills are the ones who aren’t covered by the government’s guarantee.

“The people who end up having these huge bills, they’re the ones who end up in residential care,” he said.

“I don’t know what care in the home costs - but it certainly isn’t that much.” 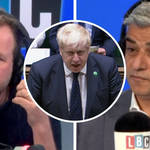 Maajid Nawaz: Tech giants are 'too powerful' and must be broken up