David Cameron's actions are "just the tip of a very large iceberg" within the Conservative Party, a caller has warned, as the former PM finds himself at the centre of a lobbying controversy.

The former PM has come under scrutiny after it emerged that he privately lobbied ministers, and even texted Chancellor Rishi Sunak, to win access to an emergency coronavirus loan scheme for his employer, financier Lex Greensill.

Downing Street has confirmed an independent investigation will be carried out into Mr Cameron's efforts to lobby for Greensill Capital.

Speaking of the former PM's actions, Dave in Liverpool told LBC's James O'Brien: "Sadly I think this is just the tip of a very large iceberg."

He then said that the story was indicative of the Conservative party getting "bolder" and that "there's nobody to hold them to account".

Dave added: "I think people are getting apathetic and these people in these positions of power they continue to feather their own beds."

James responded: "I know exactly why I'm so worried about this story and so perturbed by it."

The LBC host the explained: "This is how the really bad stuff happens, when we turn off and we look away and we stop caring."

Mr Cameron said in a statement: "In my representations to Government, I was breaking no codes of conduct and no government rules."

The former PM also said the ultimate outcome of his efforts to get Greensill's proposals included in the Government's Covid Corporate Financing Facility (CCFF) was that "they were not taken up".

However, Mr Cameron has accepted that, when it comes to the situation, he should have communicated with the Government "through only the most formal of channels" and has acknowledged he made mis-steps. 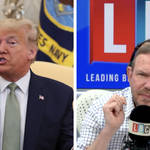